ON THE ARTS AND SCIENCES,

Daniel Chester French is a documentary film exploring Daniel Chester French’s formative years and his contributions to public sculpture, a lifetime commitment which ultimately led to hundreds of public monuments and memorials spread out across the United States. The film will premiere on May 26, 2022, at the Mahaiwe Performing Arts Center in Great Barrington, MA. Tickets to this benefit screening and reception will go on sale in March 2022.
31:00

Alice Parker is a renown composer and conductor of choral music living in a small village in the western mountains of Massachusetts. Her career that spans over seventy years initially having found prominence as Robert Shaw’s protégé and then as an independent composer collaborating and working with subjects such as Archibald McLeish, Eudora Welty, Emily Dickinson and Martin Luther King. Alice is better known today for her adaptations of children’s folk songs, operas, and church hymns . In “Alice,” the documentary film, the composer collaborates with Eduardo Montes-Bradley in a series of intimate conversations that illuminate her artistic achievements. “Alice: At Home with Alice Parker” was produced by Heritage Film Project in association with Melodious Accord. Academic Distribution Kanopy Streaming. HD | 30 mins. English. Producer Soledad LIENDO Directed by Eduardo MONTES-BRADLEY.
37:14

The Other Madisons (The Lost History of a President's Black Family) is a remarkable contribution to American history, documenting the process by which an oral tradition preserves, with exquisite fidelity, an important social record, in spite of, or perhaps in response to, suppression or neglect by exclusion, and racism. ​ In this documentary, Bettye Kearse traces her ancestry to Mandy, her family’s first African ancestor enslaved on American soil and who became the property of President James Madison's estate in Virginia, Montpelier. Kearse's research, her encounters with cultural institutions, and her travels to Ghana, Portugal, Virginia, and Texas provide the contextual background of this genealogical journey. The family mantra: "Always remember—you’re a Madison. You come from African slaves and a president" has now achieved a new level, that of the documentary film experience. ​ During the process of making The Other Madisons, the filmmaker relied heavily on Kearse’s homonymous book and her own testimony at length, while also reaching out to experts on Montpelier’s enslaved community: Matthew Reeves, archeologist; Lynn Rainville, historian; Cristian Cotz, historian, Kelley Fanto Deetz, archeologist, and Elizabeth Chew, Chief Curator at James Madison's Montpelier. "The Other Madisons" is currently in production and expected to be released to the general audience and academic institutions and their libraries in June 2021. Produced by Soledad LIENDO for HERITAGE FILM PROJECT written and directed by Eduardo MONTES-BRADLEY. HD|40 min. 2/19/21
51:14

Milton Feldman was born in 1924 to hard-working immigrants from Russia. His parents had a candy story in Brooklyn and he vividly remembers the social transformations that followed the Great Depression, a time in which the quite Jewish neighborhood where he grew up, bared witness to the Nazi youth parading swastikas alongside the Stars and Stripes. By 1937, the echoes of Fascism in Europe were an open invitation for thousands to gather at Madison Square Garden where thousands of Hitler sympathizers cheered the speech of rightwing Nationalists. The fall of 1944 will find Milt amongst the troops of the 106th Infantry Division, on board the HMS Queen Elizabeth on his way to Europe. He was ready to do his part of the American deal, just as his father Jack and done before him in some of the major battles of World War I. Milt’s was going to be an easy ride, after all most of France and Belgium had already been liberated and it was a matter of time before the Third Reich would collapse. However, on the morning of December 16th Hitler launched a massive offensive in the Western Front in what came to be known as The Battle of the Bulge. Private Milton Feldman was capture a few days, then marched and shipped by train on a boxcar to Stalag IV-B, a POW camp deep into German territory. Now, the elderly gentleman, the veteran of The Bulge, approaching 94, becomes the subject of “Milt Feldman: A Soldier’s Dream”, a documentary by Eduardo Montes-Bradley.
26:46

BEST DOCUMENTARY FILM, Richmond International Film Festival 2015 | John Borden Evans works year-round in his atelier in North Garden, Va. where we discussed for the first time the idea of a documentary film about his work. The initial concept was to expose his work from the perspective of four seasons and we started production last autumn. However, the following winter I knew that the film was going to be all about cold, snow, isolation and life on the foothills of the Blue Ridge Mountains. “White” is about an artist, and a way of life; is about a farm in a place in Virginia; it is about food and God, is about love, water, trees, and the relentless relationship between time and oneself. Moreover, “White” is a film about an artist named John Borden Evans. “White: A Season in the Life of John Borden Evans, is a close look at an intriguing couple who chartered their own course and made you envious.” - Julian Bond | Washington, DC "The whole thing is so skillfully woven together -- John's quiet voice, and silence, and then the music. It creates a wonderful, wondering mood. The stars. and the cows. and trees.” - Alice Parker | Composer "The cinematography is stunning. The notion that the cinematographer can compose an artwork that includes the painting, the artist, and the artist's life is a compelling one. It sets you an artistic goal different from the artist and challenges you to balance your eye (and ear) against his so that the audience can assess your achievement. The artist we hear has a very simple voice, at the beginning it's impossible to know where this simplicity comes from, but in the end, I think, we see simplicity as a choice, especially if we know that his wife makes clothes for Tom Wolfe. So in that arc, from the beginning to the end, the voice changes because we start to hear it differently. By reaching beyond the artwork to the life Montes-Bradley also enables the viewer to consider what of the artist's life gets into the art and what doesn't—so you are questioning formalist approaches to art. Without neglecting form. There's more to be said about simplicity, about the paring down, paring down to spiritual essence, and the director´s use of the shape-note singing keeps that theme alive as the film progresses. The color? Against white the art and the scenes from South America and the hats. This one is best, I think, of the Montes-Bradley´s that I've seen, not a wasted frame." Jeffrey Plank | UVA "The treatment of each scene mirrors the austere choice of monastic life in accord with the silence of art and its spirituality. The cautiously crafted composition, and the sensible use of light blend film and theme as one. I felt the hard-work, firm abundant and serious work which makes the film a work of art in itself, a work of art within a work of art " Eugenio Cuttica | New York City "My first impression is BRAVO and my second is superb. Your camera work is exquisite and I felt you captured something important about John as well as Beth-Neville. I’m looking forward to seeing the film about the next person you chose to profile.” David A. Maurer | The Daily Progress
52:03

“Monroe Hill” unearths the history of the site that contains the last remaining structures of the late 18th century southern plantation. These surviving structures are silent witnesses to Monroe’s struggle as a farmer and a politician from the late 1780’s until the laying of the cornerstone at the University of Virginia on October 6, 1817. The film includes the chapter of James Monroe's life as Minister to France and his relationship with Thomas Paine, Tom Wolfe, Adrienne de La Fayette, George Washington, Thomas Jefferson, James Madison and Alexander Hamilton. “Monroe Hill” brings to the foreground a previously unexplored period of the life of James Monroe featuring extensive documentation, independent research, and interviews with experts. Rare film footage from D. W. Griffith’ “America” and “Orphans of the Storm” was used to create a sense of verisimilitude. “We were able to obtain prints of excellent quality on both of these films, and they served to portray the prevailing phenotype in colonial Virginia at the turn of the 18th century” explained director Eduardo Montes-Bradley, who also affirmed that “These early American films -shot in and around Williamsburg in the late 1910’s- are more powerful than a reenactment. The texture and the overall miss-en-scene of the period dissolves flawlessly with the narration creating a sense of documental continuity.” “Monroe Hill” is an investigation of a space stationary in time, an archeologically challenging experience that explores a place and the people that contributed to its transformation; thus, challenging the idea of a mythical birthplace of the University of Virginia. The film also explores other properties owned by James Monroe during the same period, his Ministerial affairs in Paris, family liaisons, slavery, and the overall complex relationship with many of his contemporaries including Thomas Jefferson and George Washington. “Monroe Hill” was shot at the University of Virginia, and various other locations in Paris, Philadelphia, Richmond, Washington, D.C., Fredericksburg and New York. The documentary was made possible through an award from The Jefferson Trust, an initiative of the Alumni Association of the University of Virginia. Comments "With "Monroe Hill", Eduardo Montes-Bradley has produced a magnificent work of scholarship. Drawing together historical images, silent-era-black-and-white film footage, and modern commentary, the documentary persuasively argues for Monroe Hill's pivotal place in the development of the United States as a new nation. James Monroe began farming the property in 1789, the same year that the government began under the Constitution. Initially intended as a prosperous agricultural seat, "Monroe Hill" became instead a great seat of public learning. Rather than crops, the land yielded minds and knowledge, two essentials in the country's conflicted but persistent rise to prominence.” William Ferraro | Washington Papers. HERITAGE FILM PROJECT presents MONROE HILL a film by EDUARDO MONTES-BRADLEY made possible through an award from THE JEFFERSON TRUST | in collaboration with BROWN COLLEGE | CURRY SCHOOL OF EDUCATION | ASH LAWN-HIGHLAND with the support of THE OFFICE OF THE PROVOST & VICE PROVOST OF THE ARTS | THE PAPERS OF JAMES MONROE | WASHINGTON PAPERS | THE JAMES MONROE MUSEUM & THE PRESIDENTIAL PRECINCT | 52 min. | HD | 16:9

Charlottesville, Va - Alexander Street Press and Heritage Film Project signed an agreement for the distribution of seven titles by... 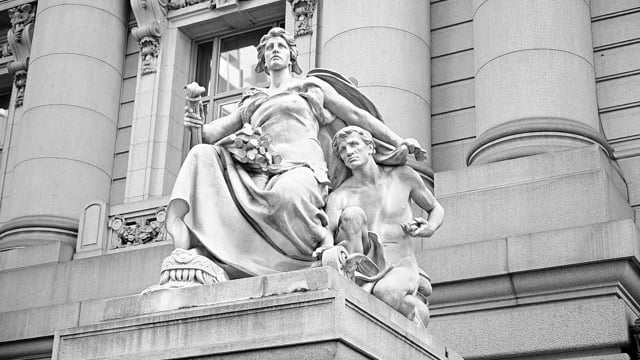 Chesterwood will mark the centennial anniversary of the Lincoln Memorial with the premiere of a documentary about its creator, sculptor...

Concord, Mass - On location and with hardly any time to update my notes on the production of “Daniel Chester French: American Sculptor”....

It is a fact that were all the dwellers there simultaneously to respond to the resurrection-call, Thoreau would be within easy conversing…

The Angel of Death

Daniel was not in attendance at the unveiling of The Minuteman. Shortly before the memorable day in which Ralph Waldo Emerson and the...

FOR IMMEDIATE RELEASE Stockbridge, MA – Chesterwood, a site of the National Trust for Historic Preservation, announces a new documentary...